That Time of Year

Just a quick bit of a post today.  I do have one that I am writing and will also write a school one soon.

Things are not looking up on the school front.  The initial meetings in the spring (other than the principal) were pretty good.  Micah was supposed to be hand timetabled which didn't happen but was fixed for the most part.  She got two of the courses she really wanted but they are in second semester.  First she has math and drama.  She had chosen English and hates drama which she had not chosen.  She is now worried about being behind in English but I told her it doesn't matter when it gets done so that seems to be okay.  Trying to get drama dropped and something put in for her to look forward to instead but no word from the school.  They still seem to be refusing to meet with her before classes start and we haven't seen her homeroom set up yet either.  We have done that the week before school started since she was in kindergarten.  She hasn't been to school since January and just jumping in to a full day with strangers is not going to go well.  The psychiatrist who confirmed the PTSD recommended half days but we are trying for full.

Micah's anxiety is growing and she is stimming a lot and with some that I have never seen before.  It doesn't help that she is losing her entire riding group including her instructor as of this week.  Just really bad timing but she will get through it.  She will still have the horse she rides and she is in therapy right now so that should help.

It is a busy time of year so it is very hard getting help to deal with all of this. 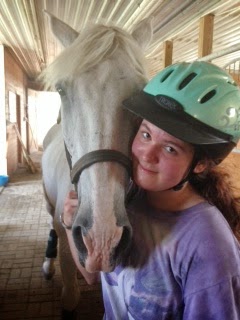