Last weekend was Surfer’s Healing in Toronto.  Surfers volunteer their time and bring out their surf boards to teach autistic kids how to surf.


I had asked Micah in the spring if she wanted to try and she did so I signed her up.  We received notification that she got in and her time was Saturday at 3:00.
I knew I would really have to plan for us since we were told to be there for registration at 11:30 and her time was in the afternoon.  I would need to plan activities to keep Micah busy, bring snacks, and plan when to walk our younger dog, feed both dogs, and give them their food stuffed Kongs.  I also had to Google a map with directions on how to get to Cherry Beach from Newmarket.


The problems started Thursday night.  The older dog got sick and I had to take her outside every two hours over night.  Not much sleep that night!  I took her to the vet in the morning and got medication for her.
In addition to getting everything planned for Saturday, I now had to worry about whether the dog would have to go out as often and whether one of us would have to stay home with her or quickly find a last minute dog walker.


Friday night, I didn’t have to get up with the dog, so I knew the dog situation was under control.
Saturday morning was the final rush to get things organized for our trip to the beach.  Most people can just leave and not worry about food because they can pack a simple picnic or just go to a local restaurant.  Not so easy for our family:  we all have celiac disease and food intolerances and also various sensory preferences.  I knew parking would be a problem so we couldn’t just leave the beach to go to a restaurant for lunch.  There were to be three food vendors there, one of which serves gluten free hamburgers in its restaurants.  Just in case I packed lots of snacks and hoped to get at least a gluten free burger at the beach.


My anxiety was increasing as I checked the car tire pressure, made sure the one dog had his long walk and stuffed their toys.
The drive down wasn’t too bad but the roads had more traffic the closer we got to the lake.  We made it to the parking lot by registration time but it was already full!  We tried another one- -full!


Micah and I got out of the car and my husband drove around looking for a spot.  As we walked toward the Aloha Toronto surf area, he had already found a spot!  That worked out well.  We walked toward the registration area and my husband went to check out the burger stand.  Micah and I went the opposite way because there was loud music playing.  We didn’t get a chance to check out all of the displays due to the loud music.  Micah really struggles with it as do many autistics.  For me, it usually depends on the situation and location.
There were so many people, sounds, and smells that my anxiety grew.
Micah did quite well with everything; although I could tell her anxiety was growing by the way she was getting more physical and demanding with me.
Another thing that made my anxiety worse was that registration was late.  When it was time to register, they told us where to go when it was Micah’s time to surf.


Sometime between 2:15-2:30, we checked at registration on how far along they were since we were told the surfing can run early or late.
Turns out they were running early and the 3:00’s had already had their turn.  That upset me because I was so careful to make sure Micah was there on time and also because they weren’t calling groups or anything so how were we to know it was Micah’s turn early.  I guess most of the families had their kids in a group by the surfing area, but I know Micah wouldn’t have been able to wait an indeterminate amount of time in a confined area with nothing to do.


It was frustrating—how did people know to be there in the right spot at the right time (really early)?  I had asked at registration about where to go when it was Micah’s time and they had said someone would meet her right outside the tent.
When we explained, they told us to take Micah down to the water and she could have her turn.


Everything worked out and she got to surf!  She started out sitting while the surfer stood behind her and paddled.  Part way through the session, Micah stood up.  From the shore, she didn’t seem too sure of herself.  She looked like she was having a hard time staying balanced and she sat back down. 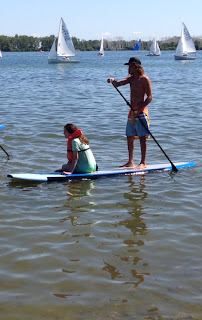 When Micah came back to shore after being out for about 20 minutes, she said she really enjoyed it.  Being on the water seemed to relax her.  I know I used to be more relaxed as a kid, when my parents took our cabin cruiser out on the lake and I sat out on the bow with my legs dangling over the edge on either side of the railing post.  It was the best when we were going fast with the wind rushing by!


We left the beach as soon as Micah was done and went for dinner.  It was early and the restaurant wasn’t busy but there was a crying baby.  It didn’t seem to bother Micah as much as it usually does.  It did make me squirm in my seat though.
Overall it was a pretty good but long day.  I managed to remain calm but it was hard keeping the anxiety and sensory overload down.  I paid for it later with complete exhaustion by the time we got home.  I just wanted to sleep and did end up turning out the light a little earlier that night.


Micah wants to do it all again next year.  Not sure that I do! 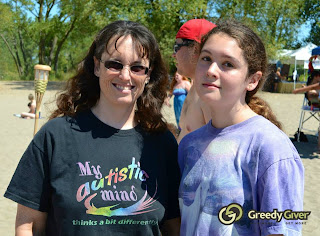 Greed Giver was there taking pictures.
Posted by Mandy Klein at Saturday, August 31, 2013 No comments: Links to this post