I just Googled it myself and it is still coming up that way.  Scary stuff.

Paula C. Durbin-Westby was typing Autistic People Should on Facebook and it auto-completed for her ...die.

Posted by Mandy Klein at Saturday, February 23, 2013 No comments: Links to this post

I still struggle with sensory integration dysfunction and severe anxiety.

I was recently given some strategies by an Occupational Therapist who works with many adults on the spectrum.  These strategies were hopefully going to reduce some of my sensitivities that were causing problems in my marriage and also reduce some of my anxiety.
I was given three activities to try: chewing gum, using a straw to drink, and the Wilbarger Protocol, along with the things I already do such as regular exercise, horseback riding, and swinging.

Heavy work activities like chewing and sucking can help with organizing and arousal level in the body.  There are other types of heavy work but those are the primary ones suggested for me.


Chewing gum is something I usually do because it seems to help reduce my reflux (there has been a study done on it for that use).  Chewing can be a calming activity.  When you are chewing gum (or your finger nails, pens, pencils), you are getting constant proprioceptive input through your jaw.  This may help with calming.  I don’t notice that this activity has a calming effect on me.  Maybe if I tried chewing when I am really anxious, I would notice a difference or maybe it just doesn’t work for me.
Sucking liquids through a straw was also recommended for me to do as a calming exercise.  As with the gum, I haven’t noticed any difference.
The third suggestion was to try the Wilbarger Protocol.  This was to help with my sensitivity to touch and also to decrease my anxiety.  Usually another person assists but an adult can do it for themselves with some modifications.
First a special brush is used with very firm pressure on the arms, legs, back, palms, and backs of the hands - Never on the face or stomach. Immediately after brushing, joint compressions are performed.  Since I was doing it for myself, I had to do pushups against the wall, jump up and down, and also do compressions on my sternum.  The routine doesn’t take too long, only 2-3 minutes but it has to be done every two hours while you are awake.  The number of sessions can be cut down after a couple of weeks.
Again, I found this did not work for me.  In fact, I ended up slightly more anxious because I had to try and fit it in every two hours. It also did not improve my sensitivity to touch.
Sensory Integration therapies are not scientifically proven therapies but they are generally not harmful (some are even fun!) to try so I didn’t have a problem with attempting them.  They also help many people.

I am disappointed that not one of the suggestions worked for me.
One of the autistic adults, who I follow on Facebook, wrote about custom ear plugs and showed a picture of what hers looked like.   Ear plugs can make things much quieter for those of us who are sound sensitive, thereby decreasing anxiety.  I didn’t know that ear plug could be custom made.  I have tried regular ear plugs without success.  They fall out too easily.  I even tried the earmuffs that go over your ears but they bother my ears so I can’t tolerate them.


I emailed several audiologists/hearing aid centres telling them I was autistic and the type of ear plugs I was looking for.  I also wanted to get some information from them as to whether they made custom ear plugs.  Two places replied saying they do and to call for an appointment.  A third place emailed me some information and pricing.  They didn’t pressure me to call for an appointment so I emailed them and asked if I could make an appointment through email instead of calling and they were fine with that.
I went to their office and picked out the type and colour of earplugs that I wanted after the man explained a bit about the ones he recommended for me.  Next a mould had to be made of my ear.  A bit of foam was pushed half way down my ear canal and then a syringe was used to fill my ear with the moulding material.  After a few minutes, the dried material was pried out of my ear and sent to the lab.  The colour I chose for my earplugs was purple! 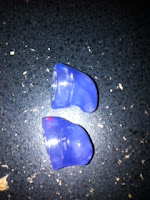 It took a week for them to come back from the lab and we discovered they needed to be resized.  They were too big for my ears.  They were sent back and new ones made.
I now have my earplugs which don’t fall out!  I have to work at getting them in properly and they are bothering my ears a bit but I will go back for some help.
I have only had the earplugs for three days and have used them for grocery shopping and when my daughter has had her friends over to play.  I even wore them out to dinner.
The earplugs take the edge off the noise thereby lowering my anxiety.
I am hoping that by discovering ideas like custom earplugs, I will be able to function better and with less anxiety.  I am grateful to have found other autistic bloggers who share their strategies. 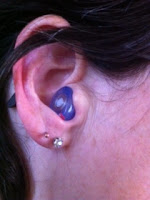 Posted by Mandy Klein at Tuesday, February 19, 2013 No comments: Links to this post